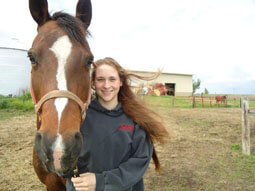 Valecia and her trusty mare sidekick back to enjoying rides together!

I have had my mare for about eight years now. She has been my trusty partner, who I would trust anywhere with anyone. Over the past two or three years she has developed a cough and wheeze. Last year, it was so bad that I was worried she would have to face a very early retirement. If she had to strain herself at all, she would start coughing and have to stop and rest. It was getting to the point where neither of us were enjoying our rides anymore.

I tried nearly everything I could think of, and then I had DMG 5,600 recommended to me. Ever since she has been on it, is has helped support her normal stamina and endurance. She has NEVER looked or felt better, and I have my old horse back! She looks great (even developing dapples, which I love), and she hasn't had any problems while being worked. I would recommend this product to anyone! Thank you! 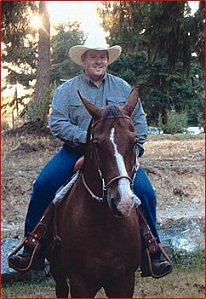 Steve and Bingo out for a ride.

I just wanted to share with you that our gelding, Bingo, is doing so much better once we put him on your DMG 5,600. I have already recommended it to many other people to use on their horses with coughs and heaves. Bingo is back to his happy, healthy self. In fact, I got to work him today and NO coughs and NO heaves! I cannot express how happy I was! …He is going on 22 this year, but acts like a colt still! He has some weight to put on, but doesn't look too bad for his age! Thank you sooooo much again! 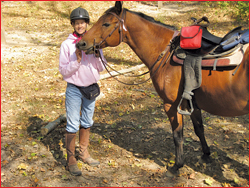 I have a foundation Quarter Horse, Handle My Wranglers (Handy), who has COPD. He has had ongoing problems for three years now and he has been on lots of meds. In addition, I have been using a hay steamer for him, keeping him outdoors and as dust-free as possible. All this, and he was still having problems. Last spring, he went into full respiratory failure and it took quite a lot to pull him back. After that episode, my vet suggested I try DMG 5,600 in combination with my horse's meds to see if that might help. I started him on DMG 5,600 last spring and noticed a difference within a few days. I am happy to report that he is off all meds now except a daily antihistamine and, so far, we are getting through the most difficult season for him (autumn) without any respiratory problems. We have been able to enjoy long trail rides and beautiful fall leaves this year, without so much as a cough.

I suggested the product to some of my friends whose horses also have had respiratory problems and they too, have improved dramatically and are able to enjoy trail rides again.

During "bad air" days, I give my horse the recommended heaping teaspoon dose twice a day (AM & PM), which is what has made a difference for him.

I have enclosed a photo of Handy and me at the Susan G. Komen Ride for the Cure which was held here in Ohio in October 2010. I am prayerful and hopeful that we will enjoy more years together on the trail. 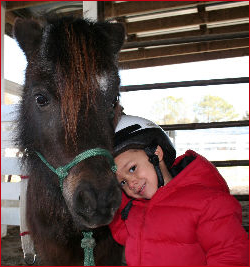 It's one of those moments a horse owner dreads. You go out to bring the horses in for the night, but, someone is missing. Where is Gypsy, my eight year old miniature? I search the darkness and start yelling her name. I see a faint shadow, something is wrong. Gypsy is moving very slowly. As she gets closer I hear her loud breathing and see her barrel is sinking in and out as she struggles to breath. A year earlier she had been diagnosed with Chronic Obstructive Pulmonary disease, commonly known as Heaves. Heaves is a respiratory ailment that results in cough, shortness of wind and exercise intolerance. She had had spells before but, this was bad.

I frantically headed to the house to call the emergency vet, who seemed more interested in scolding me for not having extra medication than helping me. Fortunately, I did have one packet of medication; I gave her a dose and called my vet the next day. Two days later I saw no improvement and asked her to stop by.

"She's really working hard" the vet said as she examined Gypsy. I could feel myself working into a panic. What if she needed to be put down? I didn't want her to suffer. The vet gave her a shot of high dose steroids. The treatment could have some serious side effects and cost $300.00. You start asking those questions that you don't want to think about. How much can I afford to put into my ailing horse and how much will I allow her to suffer? The next few days I watched over her closely, spending extra time with her, grooming her, walking her and just sitting under a tree watching her eat. Terry had bought Gypsy, at an auction. Nine months later she had surprised us with a beautiful foal who we named Cheyenne. She had given us so much, I just couldn't lose her.

But, Gypsy proved that although she was small she was tough. She experienced no side effects and the treatment seems to have helped. But, what about next time? I knew I had to find answers and a way to help my little horse. I recalled a catalog I had received called "Springtime". A huge supporter of alternative medicine in humans I decided to see what it could do for my horse. I started Gypsy on two products, the Breather Powder and DMG 5,600. The Breather Powder improves oxygenation and heart and lung function. The DMG 5,600 enhanced energy production, reduces lactic buildup, strengthens the immune response and supports oxygen utilization. I kept her stall dust and mold free and only use wood shavings. It has been almost a year since her last spell. Gypsy has put on weight and is a picture of good health. When I see her running with the herd I get a lump in my throat. I'm glad that I was able to find something that helped my little horse have a better life so she can just enjoy being a horse. 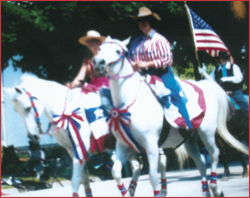 I want to thank you for your wonderful product DMG 5,600. My horse Misty has had breathing problems for the last 20 years. I had been using this product for about 13 years. She passed away last week due to an abscessed couple of teeth. She was one month and three days away from being 29 years old. She would not have lived this long if it wasn't for your product.

Am enclosing a picture of myself and my daughter Kelly riding Misty and Sun Dance in a local parade on September 6, 2008.

You have my permission to use the picture in your catalog if you would like. It would make me very happy. 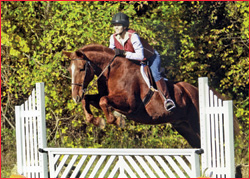 I am writing to tell you how pleased I am with both your DMG 5,600 and your Breather Powder. My 14 year old gelding, Sargeant, has severe allergies and was diagnosed with breathing issues a couple of years ago. I started him on DMG 5,600 on the recommendation of a friend, and it did wonders for him. We were finally able to compete in all the local hunter paces and were in the ribbons every time. I started him on Breather Powder last fall when his seasonal allergies kicked in and he was much more comfortable on our long rides. I made the mistake of taking him off both supplements a couple of months ago, figuring that his breathing would be better in the cold winter air, and, guess what, within a month he was in distress and diagnosed with breathing issues brought on by the allergies. He is back on both the DMG 5,600 and Breather Powder, his breathing has improved, and we're gearing up for the spring season. I learned my lesson and Sargeant will be on both supplements from here on out! Thank you for your great products. 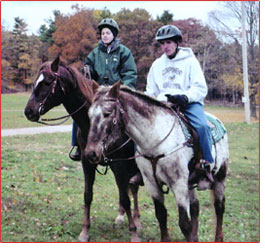 I just want to thank you for your products. I ordered the DMG 5,600 for my horse, R.J. I have had him on it for about five months now. He is doing great. I have tried so many other things to help his respiratory issues, but they never worked. This product has helped him maintain normal pulmonary health, even in the hot weather we are having. I am so pleased and want to thank you so much. Finally, after years of trying to help R.J., our 23 year old Appaloosa, a product that really is working.

Thanks again and keep up the good products.
Donna and "R.J." Benvin, New York 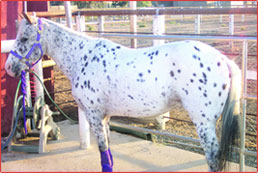 DMG 5,600 is a lifesaver! I had our vet out numerous times for our pony's coughs and nothing worked until this! I am telling all of my friends who own horses about DMG 5,600! 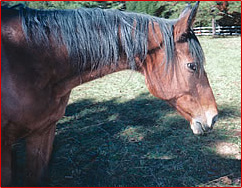 Sadie is able to enjoy the great outdoors again.

Sadie, my Thoroughbred mare, will turn 31 the first of 2006. I have had her since she was five. She has gone from a racehorse to a children's hunter to a mother. I feel if it were not for Springtime's DMG 5,600, she would not be with me today – what a wonderful product…Years back she developed allergies which eventually turned into a breathing problem. Before using DMG 5,600, it was many vet calls, shots, etc. Since using it – not one vet call. I probably have had her on it for the past four years or so… 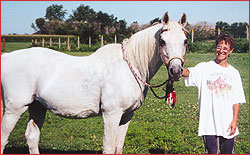 Susie with her beautiful Arabian.

A "horse" friend of mine, Ellen Ringenberg, told me about the good results she had on a horse of hers with breathing problems. I used DMG 5,600 on my 26 year old Arabian gelding who has had allergies and breathing problems for years. He was on medication every other day. Since using DMG 5,600 for three months, he has been able to maintain normal respiratory function and health. 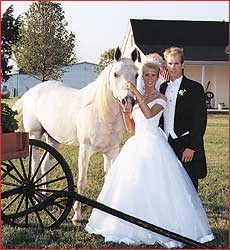 I have excellent results with the product DMG 5,600. My 23 year old Arabian gelding was having a very difficult time with his heaves/breathing allergies. He was even in an equine hospital for a week last summer to try to improve his breathing. He had been on steroids and expensive new medical procedures. I was at my wits end when I received your catalog in the mail. I decided it couldn't hurt to try the DMG 5,600 He has had remarkable improvements and acts like a new horse again! I would recommend your products to anyone. Thank you very much for your help! Keep up the good work.